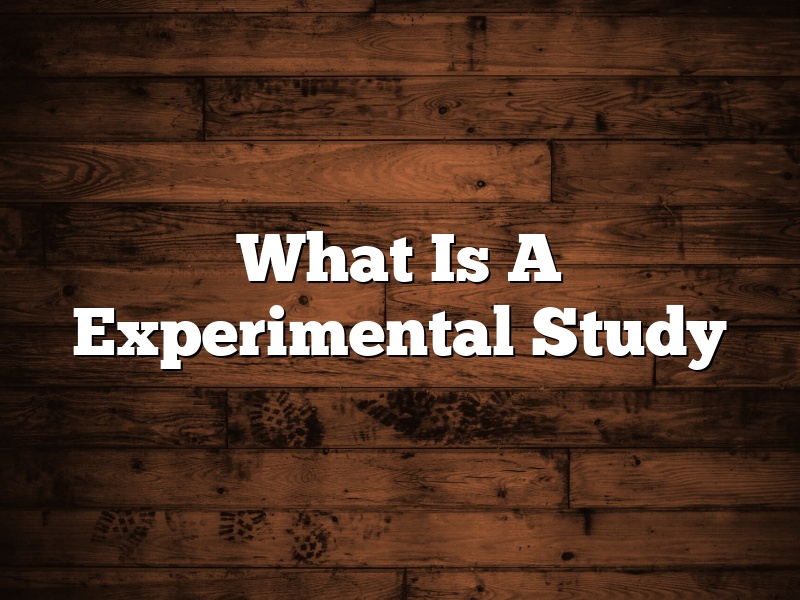 What is an experimental study?

An experimental study is a research study in which the researcher intervenes in the natural environment in order to observe the effects of the intervention. The researcher manipulates one or more factors in the environment in order to study the impact of that manipulation on some outcome of interest. Experimental studies are often used to determine the efficacy of a new treatment or to test a new hypothesis.

What is an example of an experimental study?

An experimental study is a research method used to test a hypothesis. In an experimental study, the researcher manipulates one or more variables and then measures the effect of the manipulation on another variable. This type of study is considered to be the most rigorous type of research, as it allows for the control of confounding variables.

An example of an experimental study is a study that examines the effect of a new drug on heart disease. In this study, the researcher would randomly assign participants to one of two groups: the treatment group, which would receive the new drug, or the control group, which would receive a placebo. The researcher would then measure the participants’ heart disease rates at the end of the study.

What is an experimental research design?

The purpose of an experimental research design is to allow the researcher to establish a causal relationship between the independent and dependent variables. This is done by randomly assigning participants to different treatment conditions and then measuring the impact of those treatments on the dependent variable.

It is important to note that the results of an experimental research design can only be generalized to the population from which the participants were randomly selected. Therefore, any conclusions drawn from the study should be interpreted with caution.

What is observational vs experimental study?

There are two main types of research studies: observational and experimental. Observational studies are those in which researchers simply observe what is happening without intervening in any way, while experimental studies involve the deliberate manipulation of one or more factors in order to see what effect it has on something else.

The main difference between the two is that experimental studies allow for the direct determination of cause and effect relationships, whereas observational studies can only suggest such relationships. This is because, in an observational study, there is always the possibility that some other factor (known as a confounding variable) is responsible for the observed results.

What is experimental and example?

Experimental methods are those that are used to test hypotheses. These methods are used to gather information about the natural world. Experiments allow researchers to control the variables in a study so that they can isolate the effects of a single variable.

How do you know if a study is experimental?

When looking at studies, it can be difficult to determine whether or not they are experimental. However, there are a few key factors that can help you make that determination.

Finally, experimental studies often involve the use of random assignment. This means that participants are randomly assigned to groups, and that no participant has any control over which group they are placed in. This helps to ensure that any differences between groups are due to the experimental manipulation, and not some other factor.

What is the purpose of experimental study?

What is the main purpose of experimental research?

The main purpose of experimental research is to test a hypothesis. A hypothesis is a statement that can be tested empirically, or in other words, it can be observed and measured. Experimental research is the most reliable way to test a hypothesis, because it allows you to control the variables that are being studied. By manipulating the variables and observing the results, you can determine whether the hypothesis is valid or not.