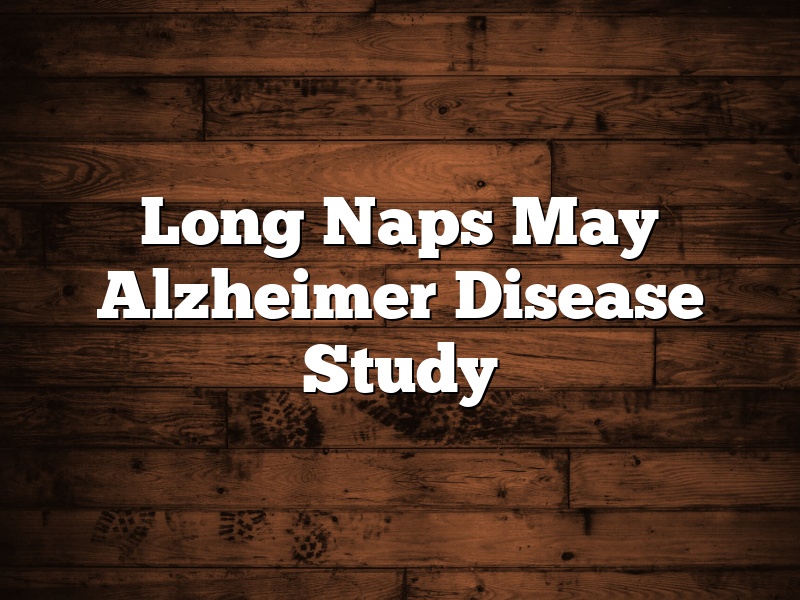 A recent study published in the journal “Neurology” has indicated that taking long naps may increase the risk of developing Alzheimer’s disease. The study was conducted by researchers at the University of California, San Francisco, who analyzed data from over 3,000 adults over the age of 65.

The study found that those who took naps of 30 minutes or longer were more likely to develop Alzheimer’s disease than those who napped for shorter periods of time or did not nap at all. This increased risk was found to be especially significant in those who napped three or more times per week.

While the study does not prove that long naps cause Alzheimer’s disease, it does suggest that there may be a connection between the two. The authors suggest that further research is needed to determine the exact nature of this relationship.

So what should you do if you’re a napper? The study’s authors say that if you do want to nap, you should keep your naps short, preferably under 30 minutes. This will minimize your risk of developing Alzheimer’s disease.

There is no definitive answer to the question of whether napping indicates dementia, as the two conditions can share some common symptoms. However, there are some things to keep in mind if you are concerned that napping may be a sign of dementia.

Dementia is a condition that affects the brain and results in a decline in cognitive function. Symptoms can include memory loss, confusion, and problems with thinking and reasoning. Dementia can significantly impact a person’s quality of life, and it is estimated that around 47 million people are living with the condition worldwide.

One of the earliest signs of dementia can be a change in a person’s sleeping habits. People with dementia may start to nap more often, or they may have difficulty sleeping at night. This can be caused by changes in the brain that make it harder to stay asleep or to stay awake during the day.

Other signs of dementia can include changes in mood or behavior, difficulty with common tasks, and problems with communication. If you are concerned that someone you know may be experiencing early signs of dementia, it is important to consult a doctor for a diagnosis.

There is no one-size-fits-all answer to the question of whether napping indicates dementia. However, if you are concerned that someone you know may be experiencing the early signs of dementia, it is important to consult a doctor for a diagnosis.

There is a growing body of research indicating that excessive daytime sleepiness may be an early indicator of Alzheimer’s disease.

One study, published in the journal Neurology in 2013, found that people with excessive daytime sleepiness were more likely to develop Alzheimer’s disease than those who did not report feeling excessively sleepy during the day. The study included more than 1,000 people over the age of 65 who did not have Alzheimer’s disease at the beginning of the study.

The participants were asked about their level of daytime sleepiness on a scale of 0 to 3, with 3 being the most sleepy. After an average of 3.3 years, about 200 of the participants had developed Alzheimer’s disease. The study found that those who had reported feeling the most sleepy during the day were more than twice as likely to develop Alzheimer’s disease as those who had reported feeling the least sleepy.

Another study, published in the journal JAMA Neurology in 2016, found that people with moderate to severe sleepiness during the day were more likely to have Alzheimer’s disease or another type of dementia than those who did not report feeling sleepy during the day.

Both of these studies suggest that excessive daytime sleepiness may be an early indicator of Alzheimer’s disease. However, more research is needed to confirm this link.

Is excessive sleeping part of Alzheimer’s?

There is no one-size-fits-all answer to this question, as the answer may vary from person to person. However, some research suggests that excessive sleeping may be a sign of Alzheimer’s disease.

Alzheimer’s is a progressive, degenerative disease that affects the brain. It is the most common form of dementia, and it is responsible for around 60% of all cases. Symptoms of Alzheimer’s include memory loss, difficulty with basic tasks, and changes in mood or behavior.

There is no cure for Alzheimer’s, but there are treatments available that can help to slow the progression of the disease. If you are concerned that you or a loved one may be suffering from Alzheimer’s, it is important to seek medical attention.

How do daytime naps affect dementia?

Daytime napping is common in older adults, and there is some evidence that napping may help to delay the onset of Alzheimer’s disease and dementia. A recent study published in the journal JAMA Neurology suggests that there may be a link between napping and a reduced risk of dementia.

The study looked at a group of people who were age 65 or older and did not have dementia. The participants were asked about their napping habits, and their cognitive function was assessed. The researchers found that people who napped every day had a significantly reduced risk of dementia, compared to those who did not nap.

While the study does suggest that napping may help to delay the onset of dementia, more research is needed to confirm this. In the meantime, if you are an older adult who naps every day, there is no reason to stop. However, if you are not currently a napper, there is no need to start napping in an attempt to prevent dementia. Napping is generally safe, but it is important to make sure that you do not oversleep, as this can lead to problems such as fatigue and sleep deprivation.

Is it normal for a 60 year old to take naps?

A nap is a short period of sleep, typically taken in the afternoon. Napping is a common habit, particularly in cultures where people work long hours. A nap can provide relief from fatigue and improve productivity.

Many people believe that napping is only for young children or the elderly. However, anyone can benefit from a nap, regardless of their age. Napping is a good way to restore energy and improve mood.

For older adults, napping can be especially beneficial. Seniors often have difficulty sleeping at night, due to factors such as noise, light and distractions. A nap can help them get the rest they need to stay healthy and active.

If you are considering taking a nap, there are a few things to keep in mind. First, make sure you have a quiet, comfortable place to nap. Avoid napping too close to bedtime, as it can make it harder to fall asleep at night.

Also, be sure to set an alarm so you don’t oversleep. Napping for too long can leave you feeling groggy and tired.

Napping is a healthy and natural way to boost energy and improve mood. Anyone, regardless of age, can benefit from a nap. If you are having trouble sleeping at night, consider taking a nap in the afternoon.

What sleeping position is linked to the first signs of dementia?

What sleeping position is linked to the first signs of dementia?

There is growing evidence that suggests that sleeping in a certain position may increase your risk of developing dementia. A new study has found that people who sleep on their side are more likely to experience the first signs of dementia.

The study, which was published in the journal Neurology, involved 585 people who were asked about their sleep habits and were given a cognitive assessment. The results showed that those who slept on their side were more likely to have lower scores on the assessment, indicating that they were experiencing early signs of dementia.

The study’s lead author, Dr. Jennifer L. Harris, said that the findings suggest that “side sleeping may be a marker for increased risk of dementia.” She added that more research is needed to confirm these findings, but that “people should be aware of the possibility that their sleep position might impact their risk of dementia.”

So far, the link between sleep position and dementia has not been proven, but these findings suggest that it is worth changing your sleep position in order to reduce your risk of developing dementia. If you usually sleep on your side, try switching to your back or stomach to see if this makes a difference.

Is sleep the key to preventing Alzheimer’s?

Sleep is important for overall health and well-being, and recent research suggests that it may also be important for preventing Alzheimer’s disease.

Alzheimer’s is a neurodegenerative disease that causes gradual memory loss and cognitive decline. There is no cure for Alzheimer’s, and currently there is no effective treatment that can stop or reverse its progression.

However, there is evidence that sleep may play a role in preventing Alzheimer’s. Studies have shown that people who get adequate sleep are less likely to develop Alzheimer’s disease, and that poor sleep quality may increase the risk of developing Alzheimer’s.

More research is needed to determine whether sleep really is a key factor in preventing Alzheimer’s disease. However, there is enough evidence to suggest that getting adequate sleep is important for overall health and may also help to protect against Alzheimer’s.