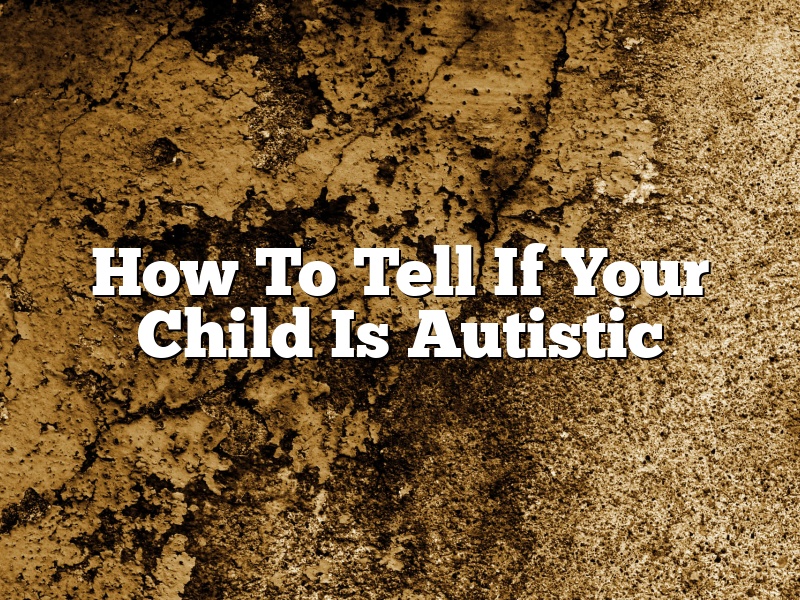 Parents often wonder how to tell if their child is autistic. There are certain behaviors and symptoms associated with autism, but not every child with autism will exhibit every symptom. In fact, many children with autism will have only a few of the common symptoms.

One of the most common early signs of autism is a lack of interest in socializing with others. Autistic children may not make eye contact, may not respond to their name, or may not understand social cues. Autistic children may also exhibit repetitive behaviors, such as flapping their hands or rocking back and forth. They may also have a restricted range of interests, or be preoccupied with a single topic.

If you are concerned that your child may be autistic, it is important to consult with a doctor. There is no one-size-fits-all test for autism, but the doctor will be able to evaluate your child’s symptoms and may refer you to a specialist for further evaluation. If your child is diagnosed with autism, there are many resources available to help you and your child get the support they need.

Autism is a neurological disorder that affects how a person communicates and interacts with others. It can also affect how a person sees and experiences the world around them.

There are three primary symptoms of autism: difficulty with communication and social interaction, difficulty with flexible thinking and problem-solving, and repetitive behaviors and rituals.

People with autism may engage in repetitive behaviors and rituals. This may include repetitive movements, such as hand-flapping, or repetitive words or phrases.

What are the 5 main symptoms of autism?

There are five main symptoms of autism spectrum disorder:

People with autism may have trouble with verbal and non-verbal communication. They may not understand idioms or proverbs, and they may use language in a repetitive or restricted way.

People with autism often have difficulty with imaginative play, which is a key part of normal childhood development. They may be unable to engage in pretend play, and they may be more interested in factual information than in fantasy.

People with autism may engage in repetitive behaviors such as rocking back and forth, flapping their hands, or spinning around.

People with autism often have difficulty with change, whether it’s changes in routine or changes in their environment. They may become agitated or upset when things are not the way they expect them to be.

Mild autism is a condition that is on the autism spectrum. It is a less severe form of autism, and it can be difficult to tell if a child has it. However, there are some signs that you can look for.

If you think your child may have mild autism, it is important to have them evaluated by a doctor. There is no single test that can diagnose autism, but the doctor will be able to look at the child’s development and behavior and determine if they may be autistic.

If your child is diagnosed with mild autism, there are therapies that can help them overcome some of the challenges they face. These therapies can help improve the child’s social skills, communication abilities, and sensory processing. With therapy, most children with mild autism can learn to live happy, productive lives.”

Autism spectrum disorder (ASD) is a neurodevelopmental disorder that affects how a person communicates and interacts with others. It can also affect a person’s ability to understand and respond to the world around them.

ASD can be present from birth, but it may not be diagnosed until later in life. The age at which autism appears can vary from child to child.

Some children with autism show signs of the disorder very early on. Others may not show any signs until they reach school age. In some cases, autism may not be diagnosed until adulthood.

There is no one “age” at which autism appears. It can manifest in a variety of ways and affect different children in different ways.

If you are concerned that your child may have autism, it is important to talk to your doctor. Early diagnosis and treatment can be helpful in maximizing a child’s potential.

According to a study published in the journal Molecular Psychiatry, both parents carry the autism gene in about 20 percent of cases.

The study was conducted by researchers at the University of California, Davis MIND Institute. They analyzed the DNA of 996 families with at least one child with autism.

Mild autism is a form of autism spectrum disorder that is considered to be on the less severe end of the spectrum. Although people with mild autism may have some challenges with communication and social interaction, they typically have fewer symptoms than people with more severe forms of autism.

One of the key characteristics of mild autism is difficulty with social communication. People with mild autism may have difficulty understanding social cues and making friends. They may also have trouble with verbal communication, such as speaking in a clear and concise manner or using gestures and facial expressions to convey their thoughts and feelings.

People with mild autism may have some of the following symptoms:

• Sensory issues (hypersensitivity or under-sensitivity to sound, touch, or smells)

• Trouble with balance and coordination

How do you rule out autism?

There is no single definitive test to rule out autism; a combination of tests and observations is necessary. Early diagnosis is key to ensuring that children with autism receive the necessary support and treatment.

A doctor will also typically conduct a physical exam to look for any abnormalities in a child’s body. Autism is not caused by a physical disorder, but some physical abnormalities may be associated with the condition. For example, a child with autism may have an unusually large head or a different-shaped nose.

A doctor may also order tests to rule out other disorders that may cause similar symptoms to autism. For example, a child may be tested for Fragile X Syndrome, a genetic disorder that can cause autism-like symptoms.

There is no one-size-fits-all answer to determining whether or not a child has autism. Rather, a combination of tests and observations is necessary. If a child’s development is not proceeding as expected, or if the child has any physical abnormalities, further testing may be necessary to rule out autism.