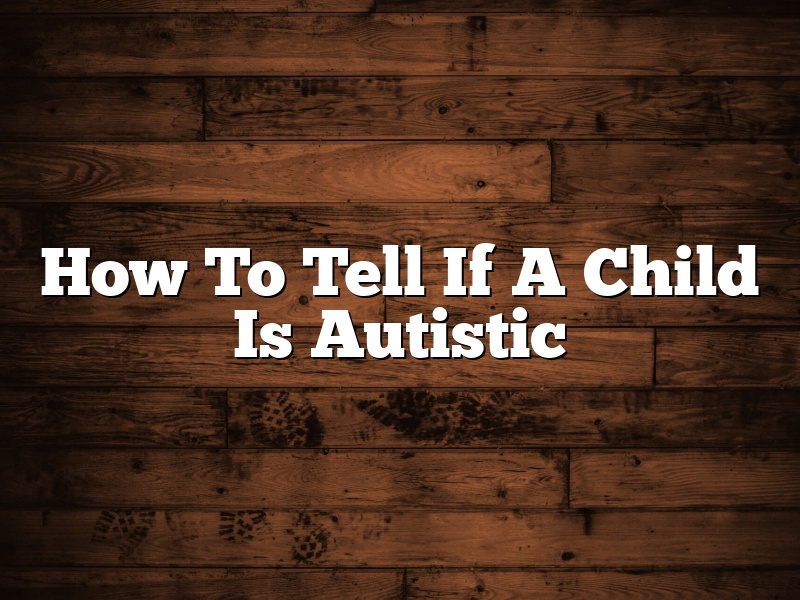 There is no one definitive way to tell if a child is autistic, but there are some behaviors and symptoms that may suggest a child is on the autism spectrum. If you are concerned that your child may be autistic, it is important to consult with a pediatrician or qualified professional who can provide an accurate diagnosis.

One of the earliest signs of autism is often a lack of eye contact. Autistic children may also avoid social interaction and have difficulty with communication. They may exhibit repetitive behaviors or have obsessive interests in specific topics or objects.

It is important to remember that all children are different and that not every child who exhibits some of these symptoms will be autistic. If you are concerned about your child, it is best to consult with a professional who can provide an accurate diagnosis.

There are three main symptoms of autism, which are deficits in communication, social interaction, and repetitive behaviors.

One common symptom of autism is a lack of communication. Many people with autism have difficulty with spoken language, and some never learn to speak. They may also have trouble with nonverbal communication, such as facial expressions and body language.

People with autism often have difficulty with social interaction. They may be unaware of social norms and be unable to form friendships. They may also have difficulty understanding other people’s emotions and reactions.

Repetitive behaviors are another common symptom of autism. People with autism may engage in repetitive movements, such as rocking back and forth or spinning around. They may also have a restricted range of interests, and be obsessed with certain topics or objects.

What are the 5 main symptoms of autism?

Autism spectrum disorder (ASD) is a developmental disorder that affects communication and behavior. It is estimated that 1 in 68 children in the United States are diagnosed with ASD.

There are five main symptoms of autism, which are:

1. Difficulty with communication and social interaction

Each person with autism may experience these symptoms to different degrees, and some may not experience all of them.

Children with autism may have difficulty with communication and social interaction. This may manifest as difficulty understanding others, speaking in a clear and concise way, or making friends.

Many children with autism also exhibit repetitive behaviors or movements. This may include hand flapping, rocking back and forth, or repeating words or phrases.

Some people with autism find change difficult, and may resist new experiences or have a difficult time adapting to changes in routine.

Many children with autism have limited interests or obsessions. They may be interested in a specific topic, such as trains or dinosaurs, to the exclusion of all else.

Many people with autism are sensitive to sensory input. They may be overly sensitive to sounds, smells, or textures, or may find certain lights or sounds unbearable.

Mild autism is a condition that falls on the autism spectrum. It is considered a less severe form of autism, but it can still cause significant problems in a person’s life. If you suspect that your child may be mildly autistic, there are some signs that you can look for.

Most cases of autism are diagnosed in children aged 3 to 4 years old. However, there is a wide range of when autism can appear. Some children are diagnosed as infants, while others are not diagnosed until they are teenagers or adults. Autism appears in different ways in different people, so it is difficult to say at what age it always appears. Some signs that a child may have autism include difficulty communicating and interacting with others, problems with social skills, and repetitive behaviors.

There is no one answer to this question as autism is a spectrum disorder, meaning that there is a wide range of symptoms and severities. However, research indicates that autism is likely caused by a combination of genetic and environmental factors.

One of the genes that may play a role in autism is the MTHFR gene. This gene helps to produce an enzyme that is needed to break down folic acid. Folic acid is important for pregnant women because it helps to prevent certain birth defects of the baby’s brain and spine. However, if a person has a mutation in the MTHFR gene, they may not be able to break down folic acid properly, which could increase the risk of autism.

Studies have shown that it is more likely for the father to pass on the mutated MTHFR gene to his child than the mother. This is because the father’s sperm cells are constantly dividing, which means that there is a greater chance for a mutation to occur in the genes. However, it is important to note that not everyone who has a mutation in the MTHFR gene will develop autism.

While it is not yet known which parent carries the autism gene, research is ongoing to determine the causes of autism.

Mild autism spectrum disorder (ASD) can be difficult to identify, as its symptoms can be very subtle. In general, people with mild ASD have some difficulty with social communication and interaction, and may also have restricted and repetitive patterns of behavior, interests, or activities.

However, people with mild ASD may not exhibit all of the symptoms of the disorder, and their difficulties may be less severe than those experienced by people with more severe forms of ASD. For example, they may have difficulty with social interactions, but be able to hold a conversation and interact with others in a limited way. They may also have restricted interests and behaviors, but these may not be as severe as those seen in people with more severe ASD.

Mild ASD can sometimes be difficult to diagnose, as many of the symptoms can be mistaken for those of other conditions, such as ADHD or social anxiety disorder. A diagnosis of mild ASD can only be made by a qualified professional, such as a doctor or psychologist, after a full assessment has been carried out.

If you think you or your child may have mild ASD, it is important to seek professional help. A diagnosis can help you to understand the condition and get the right support.

How do you rule out autism?