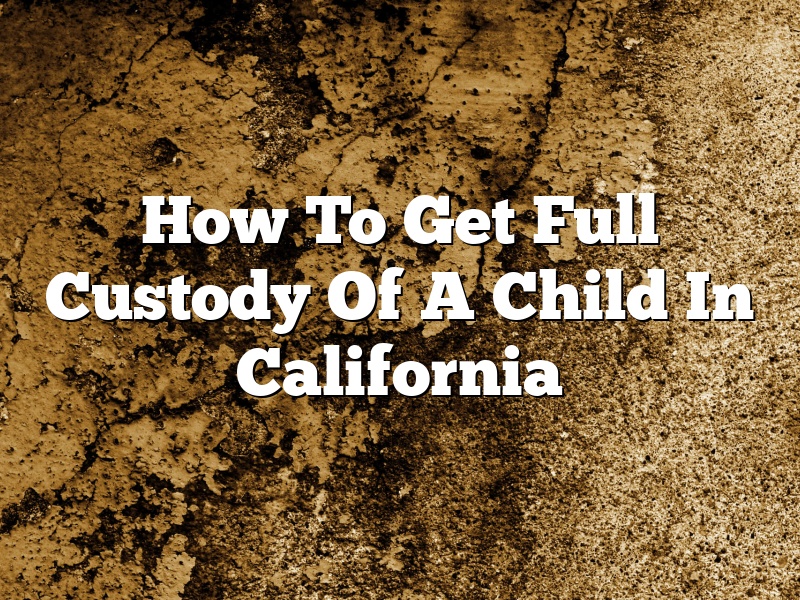 In order to get full custody of a child in California, you must file a custody petition with the family law court. The court will then decide which parent will have custody of the child based on the best interests of the child. There are a number of factors that the court will consider when making its decision, including the child’s age, health, and relationship with each parent.

If you are the parent who is seeking full custody of the child, you will need to gather evidence to support your case. This evidence may include affidavits from friends and family members, school records, medical records, and photos or videos of the child with each parent. You will also need to provide the court with a parenting plan that outlines your proposed custody arrangement.

If the other parent opposes your request for full custody, they will likely present their own evidence to the court in order to argue that they should have custody of the child instead. The court will ultimately decide what is in the best interests of the child, and it is important to present as strong a case as possible in order to increase the likelihood of being granted full custody.

How do I file for full custody of my child in California?

If you are seeking full custody of your child in California, you will need to file a custody request with the court. The process of filing for full custody can be complex, so it is important to understand the specific steps that need to be taken in order to ensure a successful outcome.

The first step in filing for full custody is to gather the necessary documents and evidence. This may include birth certificates, court orders, police reports, and other evidence that supports your case. You will also need to file a custody petition with the court. This document will state your reasons for seeking full custody of your child, as well as the specific relief that you are requesting from the court.

You will also need to file a declaration of facts. This document will outline the specific facts of your case, including the duration of your child’s residence with you, your custody and visitation arrangements, and any evidence that supports your case.

You will also need to file a memorandum of points and authorities. This document will outline the law that applies to your case, as well as any legal arguments that support your case.

You will also need to file a proof of service. This document will prove that you have served the necessary documents on the other parent and any other required parties.

It is important to note that the court may not grant you full custody if there is another parent who is fit and willing to care for your child. In such cases, the court may order joint custody or visitation. It is therefore important to present a strong case to the court in order to increase your chances of obtaining full custody.

What determines child custody in California?

What determines child custody in California? The answer to this question is not always easy to determine, as the decision often depends on a variety of factors. However, in general, the court will consider the best interests of the child when making a custody determination.

Some of the factors that the court may consider when making a custody determination include the child’s age, the child’s relationship with each parent, the child’s health and safety, the parents’ ability to provide for the child’s needs, and the parents’ willingness to cooperate with one another.

If the parents are unable to agree on a custody arrangement, the court will make the decision for them. In making its determination, the court will consider all of the relevant factors and will make a decision that it believes is in the best interests of the child.

How much does it cost to file for full custody in California?

In California, the cost of filing for full custody will vary depending on the circumstances of the case and the county in which it is filed. Generally, the cost of filing a custody case will range from several hundred dollars to a few thousand dollars.

There are a few things that can affect the cost of filing for custody. One factor is the amount of time and work that will be required to prepare the case. If the case is contested and involves a lot of litigation, the cost will be higher than if the case is uncontested and relatively straightforward.

Another factor that can affect the cost is the court in which the case is filed. Some courts charge more for filing a custody case than others.

So, how much does it cost to file for full custody in California? In most cases, the cost will be several hundred dollars to a few thousand dollars. However, it is important to consult with a lawyer to get a more specific estimate.

What makes a parent unfit in California?

How long does a child custody case take in California?

This no-fault rule can make it difficult for parties to reach an agreement on child custody. Each party may feel that they have a strong case and be unwilling to compromise. As a result, the case can drag on for months or even years.

In addition, California is a “shared custody” state. This means that the court must award custody to both parents unless there is a compelling reason not to. This can also lead to disagreements between the parties, as each parent may want to be the primary custodian.

If the parties are unable to reach an agreement on their own, the case will likely go to trial. This can also add to the length of the case. A trial can take several weeks or even months to complete.

Therefore, in general, child custody cases in California tend to take a long time to resolve. If you are considering filing for custody, be prepared for a long and difficult process.

How can I gain full custody of my child?

That said, there are a few things you can do to improve your chances of gaining full custody. First, make sure you have a strong case. Gather evidence of your parenting skills, your child’s relationship with you, and any issues the child may have with the other parent. Be prepared to present this evidence to the court.

You should also make sure you are familiar with the custody laws in your state. Each state has its own laws governing custody, and the court will be bound by these laws. familiarize yourself with the specific laws that apply to your case.

Finally, be prepared to fight for custody. Custody cases can be contentious, and the other parent may fight hard to keep custody of your child. You will need to be prepared to argue your case in court and make your case to the judge.

If you are seeking full custody of your child, these are some of the things you need to know. By preparing yourself and your case, you can improve your chances of winning full custody.

When a family law judge is deciding who will have custody of a child, there are a number of factors they will look at. Each case is unique, and the judge will make a determination based on the specific facts of the situation. However, there are some things that are typically taken into consideration.

One of the most important factors is the relationship between the child and the parents. The judge will want to make sure that the child is able to have a strong relationship with both parents, and will look at things like the amount of time each parent has spent with the child in the past.

In some cases, the judge may also look at the parents’ lifestyle. This includes things like drug and alcohol use, as well as their mental and physical health. The judge will want to make sure that the child is safe and healthy in both of their homes.