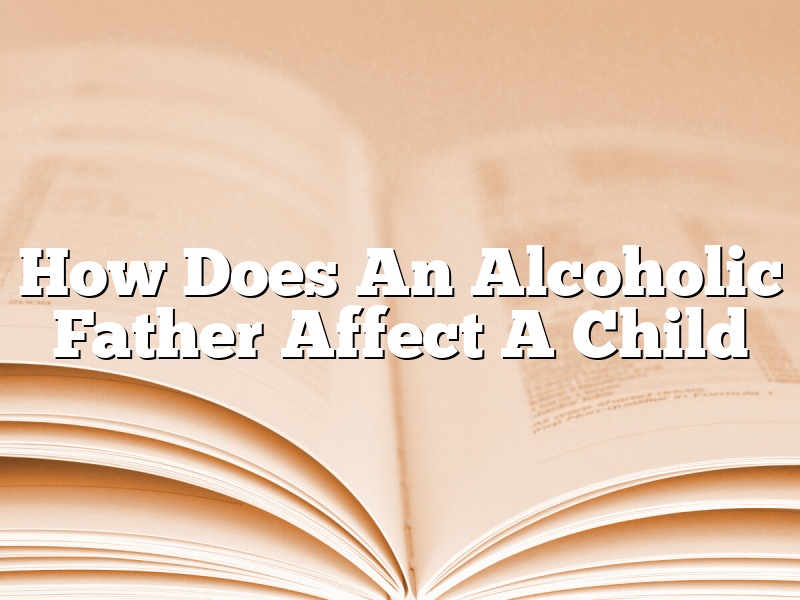 How Does an Alcoholic Father Affect a Child?

Most people know that alcoholism is a serious problem, but many may not realize the extent to which it can negatively affect families. One particularly vulnerable group is children of alcoholic fathers.

Children of alcoholic fathers can suffer a variety of negative consequences, including but not limited to:

– increased likelihood of engaging in risky behaviors, such as substance abuse and juvenile delinquency

– increased likelihood of developing psychiatric problems, such as depression and anxiety disorders

– poorer relationship with their fathers

– poorer relationship with other family members

These consequences can persist into adulthood and have a significant impact on the child’s life.

The reason children of alcoholic fathers are so vulnerable is that they are often exposed to high levels of stress. This can disrupt their development and lead to problems in areas such as cognitive functioning, emotional regulation, and social interaction.

In addition, children of alcoholic fathers often have to assume a lot of responsibility at an early age. They may have to take on caregiver roles or assume financial responsibilities. This can disrupt their normal development and leave them feeling unsupported and overwhelmed.

It is important to note that not all children of alcoholic fathers will suffer these negative consequences. Some children may be resilient and be able to cope relatively well. However, for those children who do struggle, it is vital that they receive help and support.

What are some effects of parental alcohol use?

Studies have shown that parental alcohol use can have a variety of negative effects on children. Some of these effects include academic problems, behavioral problems, and social problems.

One of the most well-known effects of parental alcohol use is academic problems. Kids who grow up in homes where there is alcohol abuse are more likely to have lower grades and to struggle in school. This is likely due to the fact that alcohol abuse can lead to a variety of behavioral problems, including poor impulse control, poor organizational skills, and difficulty paying attention.

Alcohol abuse can also lead to social problems for kids. They may have difficulty making friends and may struggle to fit in. This is likely due to the fact that kids who grow up in homes with alcohol abuse may be more likely to exhibit behavioral problems, which can make them unpopular with their peers.

How do children react to alcoholic parents?

When a parent drinks alcohol, it can have a profound effect on their children. Depending on the age of the child, they may not understand what is happening and may become scared or confused. Children of alcoholic parents often have to take on a lot of responsibility at a young age and may feel like they have to protect their parents from the consequences of their drinking. They may also feel guilty or ashamed of their parents’ drinking.

What are the symptoms of a child of an alcoholic?

There are a number of symptoms that may indicate that a child is from an alcoholic home. According to the National Association for Children of Alcoholics (NACoA), these can include physical, behavioral, and emotional signs.

Physical symptoms can include problems with sleeping, eating, and toilet training. The child may also have problems with chronic illnesses, such as asthma, allergies, and ear infections.

Behavioral symptoms can include problems with attention, hyperactivity, and aggression. The child may also have problems with socialization and relationships.

Emotional symptoms can include low self-esteem, depression, and anxiety. The child may also have problems with trust and self-identity.”

How can alcohol affect a child’s development?

Alcohol is a toxin that can be harmful to a child’s development. It can negatively impact cognitive, emotional, and social skills.

When a pregnant woman drinks alcohol, it can cross the placenta and affect the development of the baby. Exposure to alcohol can cause fetal alcohol syndrome, which can lead to cognitive and physical problems.

Alcohol can also affect a child’s development after birth. It can interfere with the growth and development of the brain, and can lead to problems with learning, memory, and attention.

Alcohol can also have a negative impact on a child’s emotional development. It can cause problems with self-esteem, aggression, and social skills.

It is important to remember that alcohol can affect a child’s development at any age. So it is important to avoid drinking alcohol while pregnant, and to keep alcohol out of reach of children.

What do you do if your dad drinks too much?

What do you do if your dad drinks too much?

There are a number of things you can do if your dad drinks too much. You can talk to him about his drinking, and you can also try to get him help. You can also create a support system for yourself, so that you have someone to rely on.

Alcohol is a legal drug that millions of people use every day. It’s important to know that alcohol can have a serious impact on a child’s mental health.

Binge drinking is a common occurrence among college students, but did you know that it’s also a problem for young people who aren’t of legal drinking age? According to the Centers for Disease Control and Prevention (CDC), about 1 in 5 adolescents report binge drinking in the past month.

What is binge drinking?

What are the risks of binge drinking for adolescents?

Binge drinking can have serious consequences for adolescents. It can lead to problems at school, risky sexual behavior, and alcohol poisoning.

What are the risks of binge drinking for children?

The risks of binge drinking for children are similar to the risks for adolescents, but children are also at risk for developing fetal alcohol syndrome (FAS).

FAS is a serious birth defect that can occur when a woman drinks alcohol during pregnancy. Children who are born with FAS may have physical and developmental problems, including learning disabilities and problems with speech and hearing.

How can parents protect their children from the risks of binge drinking?

There are several things parents can do to protect their children from the risks of binge drinking.

– Talk to your children about the dangers of binge drinking.

– Set a good example by not drinking alcohol yourself.

– Keep alcohol out of reach of children.

– Promote healthy activities, such as sports and music, instead of drinking.

It’s important to remember that alcohol can have a serious impact on a child’s mental health. Parents should talk to their children about the dangers of binge drinking and take steps to protect them from the risks of alcohol.

Should parents drink in front of your child?

There are a few things to consider when deciding whether or not to drink in front of your children. First, consider your own personal beliefs about alcohol. If you believe that alcohol is harmful and should be avoided, it is probably not a good idea to drink in front of your kids. Second, consider your child’s age and maturity level. Very young children may not understand the difference between alcohol and other drinks, and may be confused or scared by seeing their parents drink. Older children may be more likely to understand alcohol and its effects, but you should still consider their age and maturity level when making a decision.